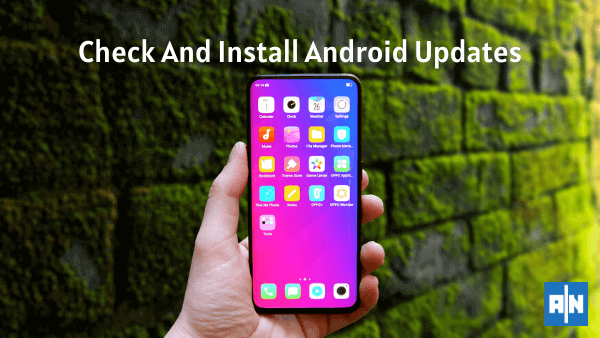 Android updates are critical for every Android device. These updates fix various bugs and security flaws that can affect your device and your privacy. Google works all the time to improve the security level and provide better functionality.

But it’s a bit of a shame that maximum Android devices do not acquire Android OS updates or even essential security updates.

The way of updating Android is a common question that many people ask. There’s no single answer to that query. As the precise steps vary with the aid of the manufacturer, Android model, and occasionally device to device although the same company had made both.

In case you are wondering the way to update your Android device, this manual will show you the necessary steps. However, the precise method may also vary slightly.

Table of Contents Show
1 What is Android?
2 History
3 Google on Android
4 Android Versions
4.1 Android Versions & Names
5 What Is Android Updates?
6 What Is Security Patch?
7 How To Update Android?
8 Conclusion

We all are familiar with Android. Android is the leading mobile operating system developed by Google. Android is based on a modified version of the Linux kernel and other open-source software. It is designed basically for touchscreen mobile devices like smartphones and tablets.

Google also has developed Android TV for televisions, Android Auto for cars, and Wear OS for wristwatches each with a functional user interface. Digital cameras, gaming consoles, PCs, and other types of electronics also use some variants of Android.

Android was initially developed by Android Inc. which was founded in Palo Alto, California in October 2013 by Andy Rubin, Rich Miner, Nick Sears, and Chris White.

The company was trying to develop an advanced operating system for digital cameras, but the market wasn’t that great, so they redesign the OS for the mobile operating system after five months later

Google bought Android Inc. for at least $50 million in July 2005. In 2007, Android was unveiled. The first commercial Android device was launched in September 2008. Since then, Android has gone through several significant releases with the current version Android 9.0 called Pie.

Android 9.0 Pie released in August 2018. Google released the first Android Q beta on all Pixel devices on March 13, 2019. The core Android source code is also known as Android Open Source Project (AOSP) which is primarily licensed under the Apache License.

The T-Mobile G1 / HTC Dream was the first Android Phone launched with Android 1.0 out of the box. And it went against Apple’s iPhone OS 2. On March 13, 2019, Google has launched Android Q beta on their Pixel devices. Now we take a look at all the Android versions and their names and how Google has named all the versions of Android

Google named every Android version in alphabetical order which means that Google’s next Android name starts with the alphabet R. On the other hand, Apart from Android 1.0 and 1.1, every different Android version has been named after either sweet treats or desserts. But Google stopped using these dessert’s names from Android Q.

What Is Android Updates?

The Android operating system for smartphones and tablets gets periodic Android Updates just like iOS, Windows, or Mac. These Android updates are basically firmware updates that work with hardware and have a deeper system level.

These are not regular software (app) updates. These updates run the device hardware. Every Android version comes with a different name because of its major update package.

What Is Security Patch?

Android Security Patches are another type of update which is much smaller in size compare to the firmware updates. Google releases security patches every 3 months. These security patches are made to improve the securities and fix the system bugs.

Each month, Google provides device OEMs with a zip file that contains patches for all major Android versions currently supported, along with a security test suite. This test suite helps OEMs to catch gaps in security patches. They ensure that they don’t miss anything and that the patches were merged appropriately.

As time goes on, Google may make minor revisions such as deciding that one specific patch is optional, specifically if there are troubles implementing it.

How To Update Android?

The process of updating an Android device is pretty similar on most of the Android devices as we described. But if your smartphone comes with different UI on top of Android, then the process may vary. Sometimes you may find an app in the app menu or app drawer that directly opens the updater app.

But for most of the devices, the process is the same as we describe. We have verified the process on some Samsung, Google, Nokia, OnePlus, Huawei, and Xiaomi devices. To update your Android smartphone, please follow the steps below:

Google always provides Android Updates and Security Patches for their Pixel line up. And also provide zip packages to the OEMs to provide those updates to their devices also. The OEMs need to implement these security patches with their OEM custom ROMs.

That’s why the updates come slowly or some OEMs do not provide those updates. If you want to know whether your device gets any update or not, just follow those steps.

Want to know more tutorials, check our How To section.

If you have any queries, feel free to ask in the comment section below.